FILE PHOTO: Peru's President Pedro Castillo addresses the audience during the opening of the VII Ministerial Summit on Government and Digital Transformation of the Americas, in Lima, Peru November 10, 2022. REUTERS/Sebastian Castaneda/File Photo

Mexico's ambassador to Peru met with Castillo where he is being detained, Foreign Minister Marcelo Ebrard said. Castillo was arrested after attempting to dissolve Congress on Wednesday in a last-ditch failed bid to avoid an impeachment vote.

Ebrard shared a copy of Castillo's asylum request written by his lawyer, in which the lawyer alleged Castillo was "at grave risk" in Peru and that he had suffered "unfounded persecution."

The lawyer also wrote that he had been unable to see Castillo in the letter, which Ebrard said was received by the Mexican embassy at 2 a.m. local time.

Peruvian authorities "have acted with political motivation in respect to (Castillo)," lawyer Victor Gilbert Perez wrote, "to such an extent that they intend to prosecute him for mere announcements of will or intention that do not constitute any criminal offense."

Castillo, a former teacher and union activist, was arrested Wednesday on criminal charges of "rebellion and conspiracy," according to prosecutors. He simultaneously faces separate corruption allegations, which he denies.

A preliminary hearing on Thursday sought to evaluate the legality of Castillo's arrest, as well as touch on an inquiry by the Attorney General's Office into charges he orchestrated a rebellion.

Earlier Thursday, Mexican President Andres Manuel Lopez Obrador said Castillo had called him Wednesday to say he was en route to the Mexican embassy in Peru to request asylum.

Castillo was arrested and never arrived at the embassy, however, Lopez Obrador said.

On Wednesday, Ebrard said Mexico had a history of granting asylum to those facing political persecution. 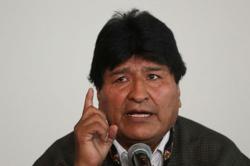