Peruvian politician Boluarte sworn in as president after Castillo's removal LIMA (Reuters) -Peruvian politician Dina Boluarte was sworn in as president on Wednesday, hours after Pedro Castillo was removed in an impeachment trial during a day of high political drama in the Andean nation.

Boluarte, elevated from vice president, becomes Peru's first ever female president, following Castillo's attempt to dissolve the legislature by decree to avoid the impeachment vote, which sparked a wave of resignations by ministers and criticism from allies.

"I take office being aware of the enormous responsibility I bear, and my first vocation is to call for the broadest possible unity of all Peruvians," she said, calling for a "political truce to install a government of national unity." 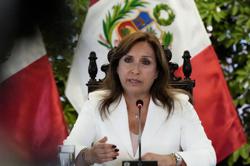