NEW YORK (Reuters) - On a day of high drama for Peruvian politics that saw the president threaten to dissolve Congress before himself being ousted, the Andean country's financial markets absorbed the punch.

The stock market fell sharply earlier in the day, only to end higher after Congress voted to oust the president, who was photographed inside a police station, though it was unclear whether he was detained.

"We saw the big sell off when Castillo tried to dissolve Congress and there was some uncertainty around what that actually meant for not only Congress, but the impeachment vote but we're seeing the sol recover ground," said Brendan McKenna, international economist and FX strategist at Wells Fargo.

"A lot of the stress that we saw early on has been absorbed. Peruvian assets are not so much under pressure as they were when the news first broke."

Peruvian markets have been resilient in the face of what was scheduled to be a third vote to impeach the leftist president by the current Congress, with investors focused on the solid fundamentals of the South American economy. The sol remains one of the few emerging market currencies with gains against the U.S. dollar so far this year.

"You have fairly high credit ratings - on the back of low debt to GDP ratio - a high level of international reserves, a large share of debt in local currency, a current account deficit almost fully covered by foreign direct investment," said Alejo Czerwonko, CIO for Emerging Markets Americas at UBS Global Wealth Management.

"So much political uncertainty is never welcome, yet the reason why markets have historically shrugged off political developments in Peru has to do with the fact that the country's fundamentals are decently strong."

The sol fell over 2% against the dollar at its session low of 3.8898 before recovering slightly to trade down 1.4% at 3.8625 per dollar in early afternoon trading.

The broad stock market index fell 3.6% at the session low but ended up 0.5%, while some dollar-denominated government bonds fell as much as 1 cent in price before recouping losses and trading higher.

Spreads to U.S. Treasuries widened to as much as 211 basis points from the 198 bps close on Tuesday, before tightening back to 200 bps. Peru's spreads rank among the lowest in Latin America.

"Castillo's attempt to overthrow Congress and other political institutions was clearly a Hail Mary by the president to avoid impeachment which obviously failed," said Aaron Gifford, emerging markets sovereign analyst in the Fixed Income division at T. Rowe Price.

"I think from here we'll see nerves calm down."

Vice President Dina Boluarte was sworn as president through 2026 and the first woman to lead the Andean nation. 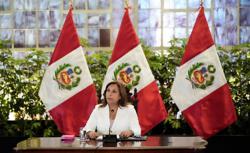