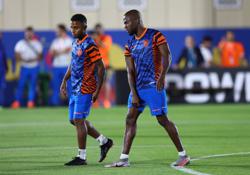 DOHA, Nov 25 (Xinhua) -- Enner Valencia's third goal in Qatar helped Ecuador to hold the Netherlands to a 1-1 draw in Group A of the 2022 FIFA World Cup here on Friday at Khalifa International Stadium.

Taking advantage of Ecuador backline's the mistake, 23-year-old Cody Gakpo from Eindhoven shot from outside the box to the top left corner early in the sixth minute to put the Netherlands ahead 1-0.

Valencia almost scored at the other end from a tight angle, but his attempt was denied by Andries Noppert's brilliant save in the 32nd minute. Pervis Estupinan scored for Ecuador in the extra time of the first half, but the goal was ruled out after a VAR review.

In the beginning of the second half, Valencia put his side level 1-1 with a follow-up tap-in in the 49th minute. He has thus become the Qatar World Cup's leading goalscorer, with three under his belt so far. The 33-year-old scored five times in the six World Cup games he played.

The Dutchmen will play against hosts Qatar next Tuesday while Ecuador will meet Senegal in their last group match.