NEW YORK, Oct. 7 (Xinhua) -- New York City Mayor Eric Adams declared a state of emergency on Friday in response to a record-breaking influx of asylum seekers into the city, mostly from the southern border of the United States.

An executive order was issued on Friday to formally direct all relevant agencies in the city to coordinate their efforts to respond to the asylum seeker humanitarian crisis and construct humanitarian relief centers on a transitory basis.

The state of emergency shall remain in effect for 30 days and may be extended, according to the executive order.

The shelter system in New York City is now operating at near 100-percent capacity accommodating over 61,000 people, and the city would have over 100,000 asylum seekers next year if current trend continues, according to Adams.

"That's far more than the system was ever designed to handle. This is unsustainable. The city is going to run out of funding for other priorities," he said.

More than 17,000 asylum seekers, mostly from South America, have been bused directly to New York City from the southern border since April, Adams said.

To accomodate the asylum seekers, the city has contracted 42 hotels as emergency shelters with one humanitarian emergency response and relief center under construction on Randall's Island, and is working with the New York governor's office on identifying additional locations for relief centers and staffing resources.

Adams said New York City expects to spend at least 1 billion U.S. dollars by the end of this fiscal year starting Oct. 1 on the migrant crisis.

He blamed political motivation and lack of coordination for the man-made humanitarian crisis.

"If our city had had coordination or even just cooperation from any of the states sending buses, or more support from our partners, then maybe we could have budgeted, staffed, and allocated resources for these asylum seekers," Adams said.

About a month ago, Washington, D.C. Mayor Muriel Bowser declared a public emergency in the nation's capital due to the arrival of thousands of migrants bused from the southern states of Texas and Arizona. 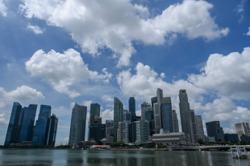