Inflation in Mexico has topped out, says president

Earlier in the day, the National Institute of Statistics and Geography (Inegi) reported that annual inflation in September held steady at 8.7 percent, the same as the previous month.

Describing the report as "good news," Lopez Obrador said that "it has reached its ceiling, its maximum limit, and my forecast is that it will start to go down."

According to Inegi, in September alone the national Consumer Price Index rose 0.62 percent over the previous month.

Core inflation, which is closely monitored by Banxico, the central bank of Mexico, was 0.67 percent in September and 8.28 percent year on year.

On Monday, the Mexican government announced the extension of an agreement with the private sector that seeks to contain inflation, especially in foodstuffs such as corn.

Banxico estimates inflation in Mexico could register 4 percent at the end of 2023 and 3.1 percent by the third quarter of 2024, in line with the official target. 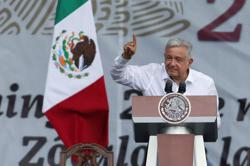