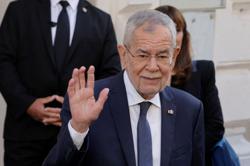 VIENNA (Reuters) - Candidates in Austria's presidential election began wrapping up their campaigns on Friday ahead of Sunday's vote in which the incumbent and clear favourite, Alexander Van der Bellen, hopes he can secure a majority to avoid a run-off.

Most opinion polls have shown Van der Bellen, the 78-year-old former leader of the Greens, on slightly more than the 50% needed to win outright in the first round. That means the challenge is to mobilise his supporters and convince them that his victory is not assured.

Neither of the main centrist parties has fielded candidates, and senior figures from both back Van der Bellen. He faces a field of six opponents, all men, with Walter Rosenkranz of the far-right Freedom Party (FPO) his closest rival, polling at around 16%.

"This is not a done deal," Van der Bellen told his closing campaign rally on Friday, attended by grandees of all parties in parliament except the FPO, the third biggest in the lower house.

"Please go and vote and convince others to go and vote. ... The biggest adversaries of democratic participation this Sunday are the sofa and comfort."

The Austrian president generally performs a largely ceremonial role, but also has sweeping powers that mean overseeing periods of transition and turbulence. Van der Bellen has seen more than his fair share of crises, and he built his image on having a steady hand and relaxed manner.

Having defeated a far-right opponent in a much closer contest in 2016, Van der Bellen swore in a coalition government that the conservative People's Party formed with the FPO in 2017, only for it to collapse in scandal in 2019 after the then-leader of the FPO was secretly filmed offering to fix state contracts.

Conservative star Sebastian Kurz quit as chancellor a year ago over corruption allegations that he denies. Van der Bellen has sworn in two other conservative chancellors since.

At his closing rally, Rosenkranz touched on core FPO themes of immigration, law and order, and criticising Brussels. He accused Van der Bellen of being the candidate of the political establishment and "the system".

"I have a funny feeling that there will be a run-off," Rosenkranz, 60, said in a speech so long that news channels cut away before the end. 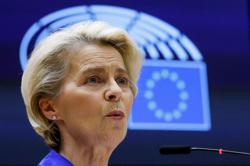