By Orhan Qereman and Suleiman Al-Khalidi

The United States has carried out previous raids in Syria against members of Islamic State, but Thursday's would be the first known operation in a zone held by forces loyal to President Bashar al-Assad.

Early on Thursday, U.S. special forces carried out a rare operation on the government-held village of Muluk Saray in the northeastern province of Hasakeh, Syrian state television said in its Telegram channel.

It said one person was killed and others were captured. It gave no further details on their identities.

U.S. Central Command Spokesman Col. Joseph Buccino told Reuters U.S. forces "targeted" an Islamic State operative in a dawn raid in northeastern Syria, but did not confirm whether the individual had been killed or captured.

Two security sources told Reuters that the man who was killed was an Islamic State official wanted by the United States.

"The airborne operation targeted a key IS leader present in the areas controlled by the Syrian government. It was successful," one of the security sources said.

The source said the man who was killed was responsible for coordinating across Islamic State sleeper cells in the area.

'PEOPLE THOUGHT HE WAS A SHEPHERD'

"This operation aims to expand the scope of targeting this organisation's members across different parts of Syria," the source added.

The second source confirmed the man killed was an Islamic State official and said the U.S. forces had taken his body with them as they retreated.

A local source said the man had moved to the village of Muluk Saray in recent years from Taif, a town near the border with Iraq that was once an Islamic State stronghold.

"People thought he was a shepherd - no one knows his true identity," said the source.

Other residents of the area confirmed the raid to Reuters.

One said that U.S. helicopters landed in the village after midnight and told residents by loudspeaker to stay indoors and keep their lights off. The resident said the operation lasted several hours and that there was no exchange of fire with the U.S. troops.

A spokesperson for the U.S.-led coalition formed to fight Islamic State did not immediately respond to a request for comment. 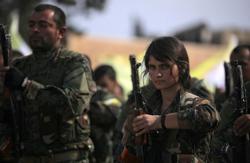