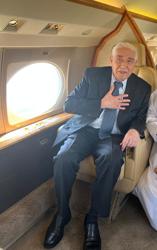 (Reuters) - Baquer Namazi, an 85-year-old Iranian American who was jailed in Iran on spying charges that the United States called baseless, is en route to Oman on Wednesday after Iranian authorities allowed him to leave for medical treatment, his lawyer said.

"I am pleased to confirm that Baquer Namazi, 85-years-old, is safely on his way to Muscat, Oman, after leaving Tehran. He should arrive in the next hour or so. After a short layover, he will be leaving Oman and heading to Abu Dhabi," Jared Genser, a lawyer for the Namazi family, said in a statement.