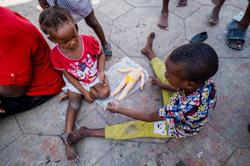 A man runs past a burning street barricade during a protest against the government and rising fuel prices, in Port-au-Prince, Haiti October 3, 2022. REUTERS/Ralph Tedy Erol

PORT-AU-PRINCE (Reuters) - Police in Haiti fired tear gas on Monday at thousands of protesters marching in the streets of the capital, Port-au-Prince, against Prime Minister Ariel Henry's government and its handling of crippling fuel shortages and soaring prices.

Reuters footage showed a man being carried on a stretcher after suffering a leg injury and police firing teargas and guns into the air to disperse protesters.

A gang blockade of Haiti's main fuel port over a fuel price increase Henry announced last month, and the resulting shortages have forced some hospitals, which are powered by diesel generators, to close, shut down transport and brought much daily life to a halt.

The protest took place on the day schools were meant to re-open after a one-month postponement of the resumption of classes after the summer break because of the economic crisis.

"If the prime minister solves insecurity and hunger, if he can solve the gang problems in the country and manage the crisis, there will be no problem in restarting classes," a protester who identified himself as Wilgens told Reuters.

"If he has no answers to these questions, he must leave power and hand it to the right person."

Another protester, Marckenson, called for Henry to step down.

In a statement to the United Nations the week after announcing the fuel price increase, Henry acknowledged the right of people to protest over rising prices but condemned the organisers of looting, vandalism and violence.

"Sooner or later they will have to answer for their crimes before history and the law," he said.

The protest came a day after Haiti's health minister said at least seven people had died of cholera, indicating more problems with access to clean drinking water in the poorest country in the Americas. 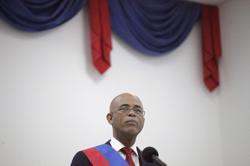