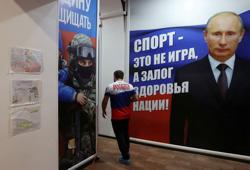 Ovsyannikova, 44, was given two months' house arrest in August, and faces up to 10 years in prison if found guilty of spreading fake news about Russia's armed forces.

The case relates to a protest in July when she stood on a river embankment opposite the Kremlin and held up a poster calling President Vladimir Putin a murderer and his soldiers fascists.

However, the state-run news outlet Russia Today reported on Saturday that she had left, and her whereabouts were unknown.

"Last night, my ex-wife left the place that the court assigned her for house arrest and, together with my 11-year-old daughter, fled in an unknown direction," it quoted her ex-husband as saying.

On Monday, her name could be seen on the interior ministry's online list of fugitives from justice, accompanied by a photo.

Russia passed a law against discrediting the armed forces on March 4, eight days after invading Ukraine.

Ovsyannikova, who was born in Ukraine, came to international prominence in March by walking out in front of studio cameras during an evening news broadcast on the flagship Channel One with a placard that read "Stop the war" and "They're lying to you".

She has already been fined for two previous protests against the war.

Russia says that what it calls a "special military operation" was necessary to prevent Ukraine becoming a platform for Western aggression, and to defend Russian-speakers.

Kyiv and its Western allies dismiss these arguments as baseless pretexts for an imperial-style war of acquisition. 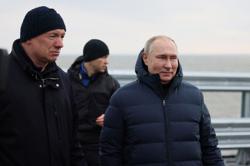