By Jonathan Landay and Tom Balmforth 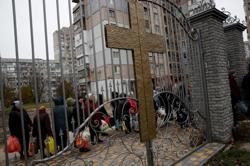 FILE PHOTO: A Ukrainian soldier looks out from a tank, amid Russia's invasion of Ukraine, in the frontline city of Lyman, Donetsk region, Ukraine April 28, 2022. REUTERS/Jorge Silva

SVIATOHIRSK/KYIV (Reuters) -Ukrainian forces achieved their biggest breakthrough in the country's south since the war began, bursting through Russian defences and advancing rapidly along the Dnipro River on Monday, threatening supply lines for thousands of Russian troops.

In a sign Ukraine is building momentum on two fronts, 300 km to the northeast Reuters saw columns of Ukrainian troop vehicles heading to reinforce rail hub Lyman, retaken at the weekend and a staging post to press into the Donbas region.

Kyiv gave little information about the gains in the south, but Russian sources acknowledged that Ukrainian troops had advanced dozens of kilometres along the river's west bank, recapturing a number of villages along the way.

The breakthrough mirrors the recent Ukrainian successes in the east that have turned the tide in the war, even as Moscow has tried to raise the stakes by annexing territory, ordering mobilisation and threatening nuclear retaliation.

"The information is tense, let's put it that way, because yes, there were indeed breakthroughs," Vladimir Saldo, the Russian-installed leader in occupied parts of Ukraine's Kherson province, told Russian state television.

"There's a settlement called Dudchany, right along the Dnipro River, and right there, in that region, there was a breakthrough. There are settlements that are occupied by Ukrainian forces," he said.

Dudchany is around 30 km (20 miles) south of where the front stood before the breakthrough, indicating the fastest advance of the war so far in the south, where Russian forces had been dug into heavily reinforced positions along a mainly static front line since the early weeks of the invasion.

While Kyiv has yet to give an account of the developments, military and regional officials did release some details.

Soldiers from Ukraine's 128th Mountain Assault Brigade raised the country's blue and yellow flag in Myrolyubivka, a village between the former front and the Dnipro, according to a video released by the Defence Ministry.

Anton Gerashchenko, an adviser to Ukraine's interior ministry, posted a photo of Ukrainian soldiers posing with their flag draping a golden statue of an angel in a village he said was Mikhailivka, on the river bank around 20 km beyond the previous front.

"It means that our armed forces are moving powerfully along the banks of the Dnipro nearer to Beryslav," he said.

Reuters could not immediately verify where the images of flags had been recorded.

The advance is targeting supply lines for as many as 25,000 Russian troops on the west bank of the Dnipro. Ukraine has already destroyed the main bridges, forcing Russian forces to use makeshift crossings. A substantial advance down river could cut them off entirely.

"The fact we have broken through the front means that... the Russian army has already lost the ability to attack, and today or tomorrow it could lose the ability to defend," said Oleh Zhdanov, a military analyst based in Kyiv.

"A month of our work destroying their supplies and reducing the combat effectiveness of this group means that they are functioning on minimal rations in terms of ammunition, fuel and food."

Since the start of September Ukrainian forces have swiftly seized territory in the country's east to gain control of Russian supply lines, cutting off larger Russian forces and forcing them to retreat.

Just hours after a concert on Moscow's Red Square on Friday where Russian President Vladimir Putin proclaimed the provinces of Donetsk, Luhansk, Kherson and Zaporizhzhia to be Russian territory forever, Ukraine recaptured Lyman, the main Russian bastion in the north of Donetsk province.

That has opened the way for it to advance deep into Luhansk province, threatening supply routes to territory Moscow captured in some of the war's bloodiest battles in June and July.

On Monday armored vehicles, fuel tanks and trucks carrying troops and supplies trundled past devastated towns and villages and the hulks of Russian tanks sitting along the road or inside shell-shattered forests, testimony to the fierce battle before Lyman fell.

Civilians looked for belongings in the rubble of homes by roadsides churned into mud.

"My son was wounded by shrapnel, and they took him to the hospital in Kramatorsk," said Lyudmyla, 64, who declined to give her last name, standing outside a bullet-pitted Ukrainian Orthodox church in whose basement more than 100 people took refuge during fighting.

"They told me he was dead, but I don’t believe it. I only believe in God. I need to see this for myself."

SHIFT IN MOOD IN MOSCOW

Russia's flagging fortunes have led to a shift in mood on once triumphal state media, where talkshow hosts have been acknowledging setbacks and searching for scapegoats.

"For a certain period of time, things won't be easy for us. We shouldn't be expecting good news right now," said Vladimir Solovyov, the most prominent presenter on state TV.

The commander of Russia's western military district, which borders Ukraine, has lost his job, Russian media reported on Monday, the latest in a series of top officials to be fired after the defeats.

Ramzan Kadyrov, the pro-Putin leader of Russia's Chechnya province who commands a personal army, demanded the commander of Russian forces in eastern Ukraine be stripped of his medals and sent to the front line.

Kadyrov also said Russia should use a nuclear weapon. Putin and other officials have said they could use nuclear weapons to protect Russian territory including newly annexed provinces, but had so far stopped short of explicitly saying they will do so. 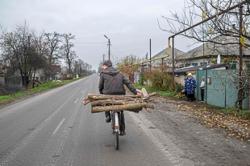