By Dave Sherwood And Brian Ellsworth

A man collects empty cans at the seafront ahead of the arrival of Tropical Storm Ian in Havana, Cuba, September 26, 2022. REUTERS/Alexandre Meneghini

HAVANA (Reuters) -Hurricane Ian is expected to hammer western Cuba late in the day with heavy winds and rain and a potentially life-threatening storm surge after strengthening overnight from a tropical storm, the National Hurricane Center (NHC) said on Monday.

The fast-growing storm is located about 100 miles (160 km) west of Grand Cayman, barreling northwest toward Cuba with maximum sustained winds of 80 miles per hour (130 km per hour), making it a Category 1 hurricane on a five-step scale.

"Devastating wind damage is possible where the core of Ian moves across western Cuba," the center said.

The storm is forecast to strengthen into a Category 3 hurricane that will soak Florida, where residents are stockpiling supplies and filling sandbags.

Cuba over the weekend began evacuating tourists and some workers from Isla de la Juventud and Cayo Largo, off its southwestern coast, where the hurricane was expected to make landfall on Monday evening.

The storm is set to cross the island as it moves north into the Gulf of Mexico, but both U.S. and Cuban forecasts put its track west of the Cuban capital of Havana, where a major storm strike would likely cause catastrophic damage to the city´s antiquated infrastructure.

Farther north, Florida Governor Ron DeSantis has declared a state of emergency in all 67 of the state’s counties, some of which had already announced evacuation orders.

The U.S. hurricane center said the highest risk of life-threatening storm surge would occur along Florida's western coast from Fort Myers to the Tampa Bay region.

In Cuba, officials have placed the island's western provinces under a hurricane alert and have announced plans for allocating food and evacuating people from low-lying areas.

At a bakery in the Cuban capital just after sunrise Monday, the line for bread had swelled to nearly twice its normal length, occupying several blocks, as demand rose for basic goods ahead of the storm.

"I´m buying bread now because later in the afternoon I won´t be able to leave my house," said Guillermo Gomez, 79, as he waited to enter the bakery. "The water will be up to my knees."

The storm appears set for a direct hit on the tobacco-growing province of Pinar del Rio, a more lightly populated area of the island dedicated primarily to farming and fishing.

Elsewhere in the Caribbean, Cayman Islands airports halted operations on Sunday due to the storm, officials said, and the island's weather service predicted waves of up to 14 feet (4.3 meters).

(Reporting by Dave Sherwood in Havana and Brian Ellsworth in Miami; Editing by Lisa Shumaker) 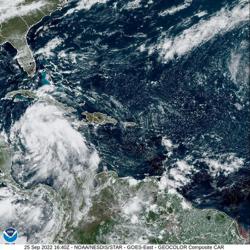