KAMPALA, Sept. 23 (Xinhua) -- Confirmed cases of Ebola virus disease in Uganda have risen to 11, and three more deaths have been registered as the East African country grapples with containing the deadly disease.

The Ministry of Health said in a statement issued here Friday that in the last 24 hours, four more cases were registered, bringing the cumulative number of confirmed Ebola cases in the country to 11.

The ministry also said three more deaths were recorded during the period, bringing the cumulative number of deaths to 11, including confirmed Ebola and suspected cases. Of these, eight deaths were from the community while three others were health facility based.

The statement said that currently there are 25 cases on admission at the health facility, out of which, six are confirmed cases while 19 are suspected ones.

The Ministry of Health teams are currently in Mubende district, the epicenter of the rare Ebola virus strain, carrying out contact tracing. Cumulatively 58 contacts have been listed, according to the ministry.

Uganda on Tuesday announced the outbreak of the rare Sudan Ebola strain after a 24-year-old male tested positive for the disease after being admitted to hospital.

Uganda said it is working with partners like the World Health Organization (WHO) to contain the spread of the disease.

The Ministry of Health urged the public to remain calm, practice preventive measures and report any suspected cases.

Ruth Aceng, the minister of Health is scheduled to hold a National Task Force meeting in Mubende to discuss measures of containing the disease.

Diana Atwine, permanent secretary of the Ministry of Health, told reporters that Uganda has the capacity to contain the disease, drawing from past experience.

"There is no need to panic at all, because Uganda is well known for handling epidemics. We have built capacity and we want to assure the public that we shall contain this epidemic," Atwine said.

Ugandan scientists say they are still investigating the source of the current outbreak, warning that there is no vaccine against the Sudan strain, unlike the Zaire strain. They urge the public to install hand washing facilities in all public places as one of the measures to fight the epidemic.

Uganda's neighbors -- South Sudan, Kenya, and Tanzania -- have issued Ebola alerts, urging their citizens to be vigilant and report any suspected cases.

The Ebola virus is highly contagious and causes a range of symptoms including fever, vomiting, diarrhea, generalized pain or malaise, and in many cases internal and external bleeding.

Mortality rates of Ebola fever are extremely high, with the human case fatality rate ranging from 50 percent to 89 percent, depending on the viral sub-type, according to the WHO. 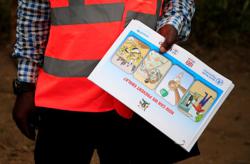