(Reuters) - Russian nuclear-powered submarines fired cruise missiles in the Arctic on Friday as part of military drills designed to test Moscow's readiness for a possible conflict in its icy northern waters, the defence ministry said.

The drills, named Umka-2022, took place in the Chukchi Sea, an eastern stretch of the Arctic Ocean that separates Russia from the U.S. state of Alaska.

Russia sees its vast Arctic territory as a vital strategic interest and has been building up its military capabilities in the region for years, raising alarm bells in the West.

It published a video on social media which it said showed the missiles being launched from vessels situated at points of the Northern Sea Route - a commercial transport channel Russia is promoting as an alternative option for cargo ships travelling between Europe and Asia.

Moscow has continued a program of high-profile military exercises even as the bulk of its land forces are engaged in the war in Ukraine. Earlier this month it conducted scaled-down war games in the Russian Far East with some 50,000 troops taking part.

Those exercises came just as a lightning Ukrainian counter-offensive that forced Russian troops to abandon swathes of territory in the eastern Kharkiv region of Ukraine was getting underway.

The defence ministry said this week's Arctic drills were a test of Russia's "ability and readiness to defend the Russian arctic by military means."

In addition to the missile launches from nuclear-powered submarines, Russia's "Bastion" coastal missile system also fired missiles at sea-based targets at a distance of 300 kilometres from the Chukchi peninsula - Russia's easternmost territory.

Russia's militarisation of the Arctic region has caused disquiet in Western capitals, other Arctic nations and among environmental groups. NATO Secretary-General Jens Stoltenberg said last month Russia's military buildup in the Arctic presented a "strategic challenge" for the NATO alliance. 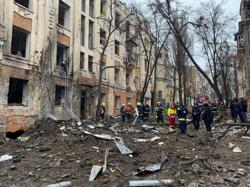 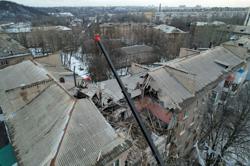