U.N. Secretary-General Antonio Guterres stands as he gets on board of a ship at Odesa port in Odesa, Ukraine August 19, 2022. UN/Saviano Abreu/Handout via REUTERS

Guterres, asked about possible Russian plans to divert power to the Russian power grid, told reporters in Ukraine's Black Sea port of Odesa that the plant should be demilitarised.

"Obviously the electricity from Zaporizhzhia is Ukrainian electricity and it's necessary especially during the winter for the Ukrainian people. And this principle must be fully respected." 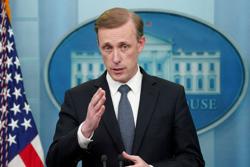