A man who security sources said is armed and holding hostages while demanding the return of his bank deposits, is seen through the door of the Federal Bank of Lebanon in Hamra, Lebanon, August 11, 2022. REUTERS/Mohamed Azakir

BEIRUT (Reuters) - A Lebanese man who had held six people hostage at gunpoint inside a commercial bank in Beirut for around six hours exited the bank on Thursday evening, a Reuters journalist said.

He lifted his hands in salute as he exited the bank accompanied by security forces. No hostages appeared to be harmed, according to the Lebanese Red Cross. 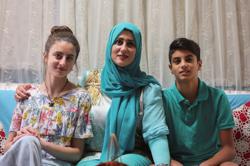