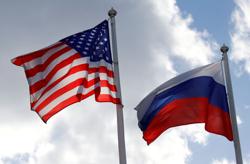 FILE PHOTO: Russia's State Duma Speaker Vyacheslav Volodin is seen before the Victory Day Parade in Red Square in Moscow, Russia June 24, 2020. The military parade, marking the 75th anniversary of the victory over Nazi Germany in World War Two, was scheduled for May 9 but postponed due to the outbreak of the coronavirus disease (COVID-19). REUTERS/Maxim Shemetov

MOSCOW (Reuters) - The speaker of Russia's lower house of parliament asked a senior lawmaker on Tuesday to look into scrapping a treaty that establishes the country's maritime border with NATO member Norway.

The treaty, which was signed in 2010, aimed to put an end to disputes between Russia and Norway in the Barents Sea, the part of the Arctic Ocean adjoining the northern coasts of Norway and Russia.

Responding to comments in parliament accusing Norway of blocking food deliveries destined for Russian-populated settlements on the Svalbard archipelago, State Duma speaker Vyacheslav Volodin asked the head of the chamber's international affairs committee to look into "denouncing" the treaty.

"Let's ask Leonid Eduardovich Slutsky to look into this issue and then inform deputies," he said.

Svalbard, located between Norway's north coast and the North Pole, is part of Norway, but Russia has the right to exploit its natural resources under a 1920 treaty, and some of its settlements are populated mainly by Russians.

Norway denies that it is blocking access to Svalbard, arguing that it is only applying international sanctions in response to Moscow's military campaign in Ukraine, and that Russia has other ways to supply the settlements.

(Reporting by Reuters; Editing by Kevin Liffey and Gareth Jones)