By Tian Jianchuan and Bai Ge 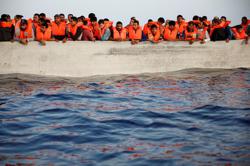 GUANGZHOU, July 3 (Xinhua) -- Twenty-seven people were missing after a floating crane sank in waters off the coast of south China's Guangdong Province on Saturday morning, according to the provincial maritime search and rescue center Sunday.

At 3:50 a.m. Saturday, the floating crane was found via monitoring system to have had dragged anchor and was in danger after its mooring chain broke while it was avoiding typhoon Chaba in waters near the city of Yangjiang.

The floating crane had sunk, according to the provincial maritime search and rescue center

Rescue helicopters, rescue vessels and merchant vessels nearby have been mobilized to search for the missing people, said the center.

Three people were rescued at about 12 p.m. Saturday and 27 others fell into water and were missing, the center said.