Potanin was included in the latest wave of 13 new sanctions listings which included other business figures, financial firms and other entities.

"Potanin continues to amass wealth as he supports Putin’s regime, acquiring Rosbank, and shares in Tinkoff Bank in the period since Russia’s invasion of Ukraine," the government press notice accompanying the announcement said.

Potanin is one of Russia's richest people, although his net worth depends largely on the value of his 36% stake in Nornickel, the world's largest producer of palladium and refined nickel. 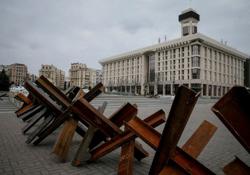