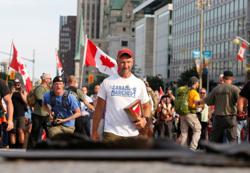 FILE PHOTO: A man poses for a photo in front of the National War Memorial as truckers and supporters take part in a convoy to protest coronavirus disease (COVID-19) vaccine mandates for cross-border truck drivers in Ottawa, Ontario, Canada, January 29, 2022. REUTERS/Patrick Doyle

OTTAWA (Reuters) - Ottawa officials said on Monday they are closing roads and calling in reinforcements to keep anti-government "freedom" protesters from disrupting Canada Day festivities, which are being held for the first time in three years on Friday.

Due to the COVID-19 pandemic, the free concerts and other activities usually held on the July 1 national holiday, which celebrates the founding of the country, were canceled.

This year several groups that say they are protesting against a variety of things - including coronavirus vaccination mandates, globalization and government efforts to limit freedom in Canada - are planning marches and even a dance party.

Some of the same organizers were behind a truck convoy that blocked Ottawa's downtown core around parliament for three weeks, snarling international travel and trade as well as resulting in dozens of arrests. Ottawa officials are still facing criticisms for their handling of the crisis.

Ottawa's interim Police Chief Steve Bell said he expects hundreds of thousands of people to participate in the Ottawa celebrations, but does not know how many people plan on joining the protests.

"We won't be intimidated by any group that plans to disrupt the celebrations," Ottawa Mayor Jim Watson said during a news conference. "We're prepared, and we will not tolerate any illegal activity by anyone."

Friday's protests will include an alternative free concert in front of the Supreme Court, a march to city hall where speakers will address the public and finally a dance party in front of parliament.

Multiple police forces, including the Royal Canadian Mounted Police (RCMP), are being brought in to help, Bell told reporters.

Already from Wednesday, access to the streets around parliament will be limited, and most of the streets in the downtown core will be closed on Friday. No vehicles will be allowed to park illegally and no structures, including tents, will be allowed, Bell said.

"We're prepared to take decisive and lawful action to deal with threats, occupation attempts, and other unlawful behavior that we observe," Bell said.