How Ukrainian defenders left Sievierodonetsk in boats under cover of night

By Natalie Thomas and Valeriia Dubrovska

Anton (R), a soldier who returned from Sievierodonetsk, poses for a picture with his friends, amid Russia's invasion of the country, in Slovyansk, Donetsk region, Ukraine, June 26, 2022. REUTERS/Marko Djurica

SLOVIANSK, Ukraine (Reuters) - One of the last Ukrainian defenders of Sievierodonetsk said he withdrew in a boat, bitter to be leaving after weathering a weeks-long Russian onslaught on the ruined city but happy to be alive as he and others crossed the river to higher ground.

Russian forces fully occupied the frontline eastern city on Saturday, both sides said, confirming Kyiv's biggest battlefield setback for more than a month following some of the war's bloodiest fighting.

"It was a shame of course because a lot of effort was put into defending it - it went on for months," Danylo, a 24-year-old soldier who said he was among almost the last to leave, said.

He and another soldier, Anton, who also left in the final days, described their pullback across the Siverskyi Donets river in interviews on Sunday.

They spoke to Reuters in Sloviansk, a town some 60 km (35 miles) west of Sievierodonetsk that has now become one of Ukraine's key strongholds for its defence of the industrial Donbas heartland that Russia's assault is focused on capturing.

"It was mostly under darkness for safety. The locations of the crossings were constantly changed because they were also shelled," Danylo said.

He said that, as far as he was aware, no one was killed in the pullback.

FEARS OF ANOTHER MARIUPOL

Anton said Sievierodonetsk's defenders feared a rerun of the encirclement of the Azovstal steel works in the southern port city of Mariupol, where hundreds of Ukrainian fighters holed up before eventually surrendering.

In Sievierodonetsk, the Ukrainian forces were also pushed back to a sprawling industrial area, this time that of the Azot chemical plant.

"There were a lot of civilians, soldiers and everything was moving towards us being encircled," Anton said, accusing Russia's army of using "scorched earth" tactics.

"If it was just infantry and an assault, we would still be able to defend, but their tactic is to destroy all the buildings, destroy everything there is and we just have nowhere to fortify, nowhere to conduct a positional war, nowhere to defend," he said.

"They're just testing our endurance. There are no logical explanations for their actions, but they're just draining us, that's their whole tactic," he said.

Moscow denies targeting civilians in what it calls a "special military operation" in Ukraine. Kiev and the West accuse Russian forces of war crimes in a conflict that has killed thousands and sent millions fleeing abroad.

Anton said the defenders were ordered to pull back because, due to heavy losses, there was no point in holding on. He said he believed Russian forces had taken much heavier losses.

"When you fight for every street ... every scrap of this land becomes your own home and you fight for it all. It's hard (the decision to withdraw), but that's the order and that means it's the right thing to do," he said.

Back in Sloviansk, Tatyana Khimeon, formerly a choreographer, said she was volunteering to distribute supplies including socks, wet wipes, body armour and helmets.

"It's difficult for the boys when they leave occupied cities. So we smile and hug them to lighten the mood a bit," she said.

"But in general their morale is good. We believe in them, we're hoping for them." 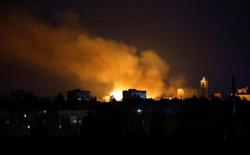