Pats on back, all smiles as Macron, Johnson appear to bury hatchet for G7

SCHLOSS ELMAU, Germany (Reuters) -French President Emmanuel Macron and British Prime Minister Boris Johnson appeared to bury the hatchet on Sunday on the sidelines of the G7 summit a year after the two clashed over Brexit and in particular Northern Ireland.

Despite the issue remaining in the public, French officials said the Northern Ireland protocol had not been part of bilateral talks on Sunday and that on the contrary the two sides had decided to improve their relationship, focusing in their joint efforts to help Ukraine in its war against Russia.

With pats on the back and smiles the two leaders jovially exchanged pleasantries at the start of their bilateral meeting, suggesting a much more warmer relationship after a year that had seen the two close allies clashed over issues including most recently in Rome on fishing rights.

"The word Brexit wasn't mentioned," a French official said, adding that the two had decided to focus on Ukraine and the consequences of the war.

A British readout said the two agreed to provide more support for Ukraine in its war with Russia, Johnson's office said.

"They agreed this is a critical moment for the course of the conflict, and there is an opportunity to turn the tide in the war," a Downing Street spokesperson said in a statement.

A French official said Macron had brought up the subject of the European Political Community.

Macron last month suggested creating a European political community that would create a new structure, allowing closer cooperation with countries seeking EU membership, even suggesting Britain could be part of it.

The official said Johnson had shown a lot of enthusiasm for the idea, saying he had previously suggested such an initiative. 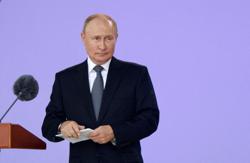