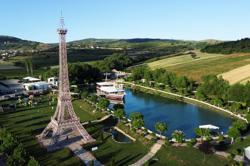 BRUSSELS (Reuters) - Bulgaria's block on North Macedonia's progress to join the European Union is a "disgrace", Albanian Prime Minister Edi Rama said as he arrived for a special Balkans summit with EU leaders, whom he also accused of "impotence".

"It's a disgrace that a NATO country, Bulgaria, kidnaps two other NATO countries, namely Albania and North Macedonia, in the midst of a hot war in Europe's backyard with 26 other EU countries sitting still in a scary show of impotence," Rama told reporters on Thursday, referring to Russia's invasion of Ukraine.

EU member Bulgaria in 2020 blocked the start of accession talks with North Macedonia over a dispute relating to history and language. Albania is also being held back because the EU has linked its progress to that of North Macedonia.

Rama, who briefly considered not attending the summit, was also referring to the frustration of the six Balkan EU hopefuls - Albania, Bosnia, Kosovo, Montenegro, North Macedonia and Serbia - that France and Germany were not doing enough to pressure Bulgaria to lift its veto.

Such EU decisions require unanimity among the 27 states.

Balkan citizens have long dreamed of joining the EU after the ethnic wars of the 1990s, as Yugoslavia disintegrated, and EU leaders will again say at Thursday's summit that the six countries will have membership one day, according to a draft final statement seen by Reuters.

But northern countries such as France and the Netherlands have stalled the EU's "enlargement" process, fearing a repeat of the rushed accession of Romania and Bulgaria in 2007 and the poorly managed migration of eastern European workers to Britain that turned many Britons against the EU.