BOGOTA (Reuters) - Independent candidate Rodolfo Hernandez and leftist Gustavo Petro were locked in a tight virtual tie for the June 19 runoff election for Colombia's presidency, according to an Invamer poll released on Friday.

According to the poll results, Hernandez, a construction magnate, reached 48.2% of the vote preference, and Petro, a former mayor and current senator, scored 47.2%.

While Hernandez, of the Anti-Corruption Rulers' League Party, gained from the 47.4% he scored in Invamer's May poll, Petro of the Historic Pact lost 2.8 percentage points from the previous survey.

The result indicates a tie as the difference between the two candidates falls within the poll's margin of error of 2.69%.

Hernandez made a surprise electoral leap in the first round of the May elections, defeating the second favorite in the polls, center-right candidate Federico Gutierrez. That qualified him to run for president in the second round.

The survey included 2,000 interviews conducted between June 3 and 7 in 83 cities and municipalities in the Andean nation.

Meanwhile, 4.7% of those surveyed said they would cast a blank ballot, an option Colombian voters can choose when they decide not to vote for any candidate.

Hernandez, 77, is campaigning against corruption to boost economic growth and finance programs focused on reducing poverty and inequality, generating employment, as well as improving education, health and housing for the poorest.

Some of his initiatives, like suspending new oil exploration contracts, reforming the pension system, ending tax exemptions and raising taxes on the richest, have caused concern among oil companies and miners. 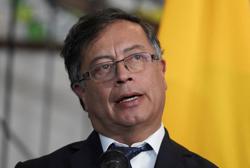 This artist uses AI to show how the world’s streets could be more pedestrian-friendly
Cisco hit by cyberattack from hacker linked to Lapsus$ gang
France fighting 'monster' wildfire near Bordeaux -FNSPF
UK prosecutor authorises terrorism charges against IS suspect
Cheaper, changing and crucial: the rise of solar power
'Freedom, happiness, opportunities': Afghan women learn to swim, drive in Australia
Disney+ ad-free subscription cost to rise by 38% in December
Elon Musk says Twitter hiding witnesses he needs in buyout fight
The ‘crying CEO’ says he loves his employees – even those he laid off
Social media offers parents more controls. But do they help?