CAIRO, May 27 (Xinhua) -- Egyptian Finance Minister Mohamed Maait on Friday described Moody's decision to maintain some of the country's credit rating levels as "a very positive decision" in light of global economic difficulties that emerging economies are dealing with.

In a statement released by the Finance Ministry, Maait said Moody's report reflected international institutions' confidence in the flexibility and strength of the Egyptian economy after the implementation of the country's economic and financial reforms over the past six years.

Despite the complicated external shocks that have afflicted the global economy in general and emerging economies in particular, Egypt has achieved favorable economic statistics, Maait said.

According to the official, Egypt's growth rate hit 7.8 percent from July 2021 to March 2022, and the country is estimated to grow by 6.2 percent in the entire fiscal year. Meanwhile, the unemployment rates in Egypt lowered to 7.2 percent in March 2022, the lowest in many years.

However, Moody's has revised Egypt's economic outlook from "stable" in February 2022 to "negative" in May due to rising food prices.

Inflation in Egypt, a major Russian and Ukrainian food importer, rose to its highest level in about three years in April to more than 13 percent, driven by a rise in the price of food and an increase in energy prices, according to the Ministry of Finance.

If the government could not mitigate such rises in prices, it would cause social tensions, despite the foreign financial support of the sovereign funds of Gulf states and the prospect of a new program by the International Monetary Fund, according to Moody's.

Maait said Egypt was working to improve economic conditions, with the prospect of Moody's returning the country's outlook to "stable".

"The Egyptian government hopes to attract 10 billion U.S. dollars annually in foreign direct investment (FDI) in the forms of development projects in the next four years," Maait noted.

The FDI projects will be in the sectors of communication, information technology, water desalination, financial services, renewable energy, green hydrogen production, real estate investments, and expansion of new cities, according to the official.

Waleed Gaballah, a finance professor at Cairo University, said Egypt was grappling with rising wheat prices as a result of the Ukraine-Russia crisis.

However, Egypt has a track record of economic resiliency based on significant economic development, which will aid the country to overcome economic challenges, according to Gaballah. 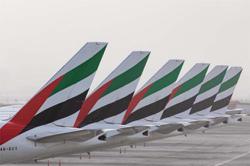