"These cases were suspected by local clinicians. They were identified by local laboratories and triggered local public health action to help with treatment and management of any potential contacts," CDC Director Rochelle Walensky said at a press briefing.

Some of the nine cases have a recent history of international travel to areas with active monkeypox outbreaks, but others do not, Walensky said.

Officials expect more cases to be diagnosed as the CDC has urged doctors and the public to be on the lookout for symptoms.

"We shouldn't be surprised to see more cases reported in the United States in the upcoming days. It's actually a sign that Americans are remaining vigilant, and health care providers and public health workers are doing their job," said Raj Panjabi, White House senior director for health security and biodefense. 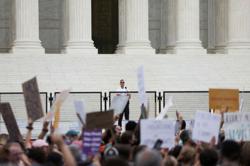