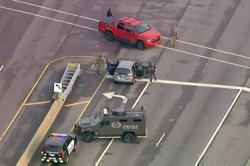 A Texas Department of Public Safety officer stands in front of crosses with the names of victims of a school shooting, at a memorial outside Robb Elementary school, two days after a gunman killed nineteen children and two adults, in Uvalde, Texas, U.S. May 26, 2022. REUTERS/Marco Bello

(Reuters) - A shooting at a Texas elementary school that killed 19 children and two teachers has revived a push for new gun safety laws in the United States, which has more firearms than people and more permissive gun laws than many other high-income countries.