People watch a TV broadcasting a news report on North Korea's launch of three missiles including one thought to be an intercontinental ballistic missile (ICBM), in Seoul, South Korea, May 25, 2022. REUTERS/Kim Hong-Ji

UNITED NATIONS (Reuters) - The U.N. Security Council will vote in the "coming days" on a U.S.-led push to further sanction North Korea over its renewed ballistic missile launches by banning tobacco, cutting oil exports to Pyongyang and blacklisting the Lazarus hacking group, a senior U.S. administration official said on Wednesday.

North Korea fired three missiles on Wednesday, including one thought to be its largest intercontinental ballistic missile, after U.S. President Joe Biden ended a trip to Asia. It was the latest in a string of missile launches by North Korea this year. 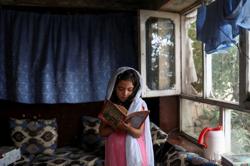