KABUL, May 25 (Xinhua) -- A number of people were killed and wounded after explosions rocked Afghanistan's capital Kabul and the northern city of Mazar-i-Sharif on Wednesday, authorities said.

In Kabul, at least two worshippers were wounded after a blast ripped through a mosque during evening prayers in Kolola Pushta locality of Police District (PD) 4, the capital police confirmed citing initial reports. 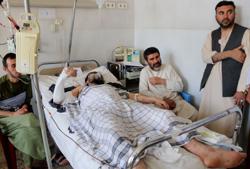