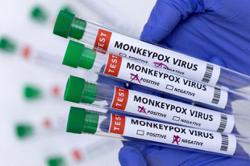 LOS ANGELES, May 24 (Xinhua) -- The U.S. Centers for Disease Control and Prevention (CDC) issued a new warning regarding monkeypox on Monday as it is investigating four more suspected cases in the country.

Currently, the United States has reported one confirmed case of monkeypox which is in a man in Massachusetts, who recently returned home from Canada.

The four suspected cases are in New York, Florida and Utah. They tested positive for orthopoxvirus, the family of viruses to which monkeypox belongs.

"It is likely that there are going to be additional cases reported in the United States," said Dr. Jennifer McQuiston, a veterinarian and deputy director of the CDC's Division of High Consequence Pathogens and Pathology.

The CDC is also tracking multiple clusters of monkeypox that have been reported in early- to mid-May in several countries that do not normally report monkeypox, including in Europe and North America.

"None of these people reported having recently been in central or west African countries where monkeypox usually occurs, including the Democratic Republic of the Congo and Nigeria, among others," said the CDC.

The CDC warned travelers to avoid close contact with sick people, including those with skin lesions or genital lesions, and avoid contact with dead or live wild animals such as small mammals including rodents, and non-human primates such as monkeys, and apes.

Monkeypox is a rare disease caused by infection with monkeypox virus. Monkeypox occurs throughout Central and West Africa, often near tropical rain forests, according to the CDC.

Monkeypox can spread through direct contact with bodily fluids or through contact with contaminated clothes or bedsheets, according to the CDC.

"Anyone can spread monkeypox [from] contact with body fluid or monkeypox sores or respiratory droplets when close to someone," said John Brooks, chief medical officer for the CDC's Division of HIV/AIDS Prevention.

The virus typically incubates for seven to 14 days before symptoms appear, according to the CDC.

Symptoms include fever, headache, muscle aches, and swollen lymph nodes, followed by a rash. Lesions typically develop at the same time and evolve together on any given part of the body. Lesions progress through several stages before falling off, according to the CDC.

This can happen all over the body. The illness usually lasts two to four weeks.

A person can be contagious from one day before the rash appears until up to 21 days after symptoms began. Once the scabs fall off, the person is no longer contagious, the CDC says.

Monkeypox is fatal in as many as 1 percent to 11 percent of people who become infected. Prior vaccination against smallpox may provide protection against monkeypox.

The risk of monkeypox to the general public is "extremely low" at the moment, and there is "no cause for panic," Daniel Bausch, president of the American Society of Tropical Medicine and Hygiene, told Xinhua.

"Although we need to get to the bottom of this and understand what is going on, it is extremely unlikely that we will have a large outbreak or pandemic of monkeypox. These will likely remain as smaller clusters in defined geographic areas," he said.

Currently, there is no proven, safe treatment for monkeypox virus infection, according to the CDC. For purposes of controlling a monkeypox outbreak in the United States, smallpox vaccine, antivirals, and vaccinia immune globulin can be used, said the agency.

According to the World Health Organization, as of May 21, 92 laboratory -confirmed cases and 28 suspected cases of monkeypox had been reported from 12 countries that are not endemic for monkeypox virus. 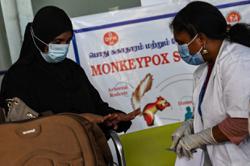