There were no injuries reported and there are no public safety concerns. The cause of the derailment in the Western Canadian province is under investigation, CP Rail said.

"CP personnel have responded to the scene and recovery operations are under way," the company said in a statement.

Canada depends heavily on its rail system to move commodities and manufactured goods to ports.

(Reporting by Shivam Patel in Bengaluru; Editing by Paul Simao) 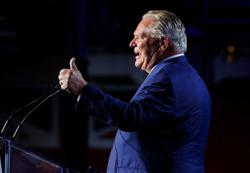