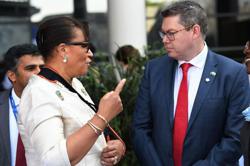 LOS ANGELES, May 20 (Xinhua) -- Many Americans still fail to notice that anti-Asian violence and racism have surged since the Atlanta massacre last year that left eight dead, including six Asian women, an American researcher has said.

Anti-Asian hate crimes have increased since the start of the pandemic: 1 in 6 Asian American adults reported experiencing a hate crime in 2021, up from 1 in 8 in 2020, said Jennifer Lee, the Julian Clarence Levi Professor of Social Sciences at Columbia University and an elected Member of the American Academy of Arts and Sciences, in an article published on the website of the Brookings Institution this week, citing a national survey by AAPI Data and Momentive.

In the first three months of 2022, the figure has already reached 1 in 12. This trend may continue given the rise in anti-Asian racism, the article added, noting that the 2022 STAATUS Index shows that 1 in 5 Americans believe that Asian Americans are at least partly responsible for COVID-19 compared to 1 in 10 last year.

In the past year alone, 1 in 10 Asian Americans have been coughed on or spit on, and nearly 1 in 3 have been told to "go back to your country." One-third of Americans, however, continue to remain unaware that racist attacks against Asians have increased, according to the article.

The invisibility is also glaring in funding priorities. Between 1992 and 2018, the National Institutes of Health invested only 0.17 percent of its budget on research on Asian Americans and Pacific Islanders, said the article, adding that Asian Americans also remain invisible in the country's school curricula.

"Apart from the country's rapidly changing demographic landscape, as researchers, we should ask ourselves: What are we missing when we fail to include Asian Americans in our analyses?" the author asked.

"Thoughtfully including Asian Americans in our projects and in our courses will do more than make Asian Americans visible. It will assuage anti-Asian bias in our departments, our institutions, our disciplines, and will help disrupt the pernicious stereotypes that harm not only Asian Americans but also other people of color," the article noted.