FREETOWN, May 13 (Xinhua) -- Beginning June 1, mining companies and other commercial end-users of fuel in Sierra Leone will have to import their own fuel or buy it from oil marketing companies (OMCs) under a foreign currency-denominated contract, the Finance Ministry has said.

The policy directive is part of the government's approach to mitigating the ongoing crisis in the country's petroleum downstream sector, which has largely been attributed to the Russia-Ukraine conflict, Finance Minister Dennis Vandy was quoted as saying in a statement issued late Thursday. 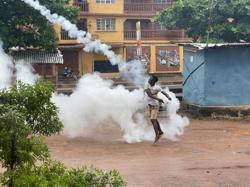