FILE PHOTO: German Interior Minister Nancy Faeser arrives for a group photo at the first meeting of the new cabinet at the Chancellery in Berlin, Germany December 8, 2021. Ina Fassbender/Pool via REUTERS

BERLIN (Reuters) - Legal standards on the treatment of migrants must be upheld at the EU's border with Belarus, Germany's Interior Minister Nancy Faeser said on Thursday, as she and her EU counterparts met to discuss what the bloc has called a hybrid attack by Minsk.

"(Belarusian President Alexander) Lukashenko's behaviour towards the EU is scandalous and inhuman, he capitalises on the distress of the people to play for a domestic audience," Faeser told reporters as she arrived in Brussels.

"It is important that legal standards are upheld at the border, which is why I would welcome a deployment of Frontex there, and it is just as important that aid organisations have access at all times," she added. 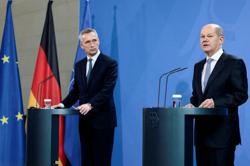