FILE PHOTO: Fireworks are seen in a showroom of German fireworks producer Weco at the company's headquarters in Eitorf, Germany, November 23, 2020. REUTERS/Thilo Schmuelgen

BERLIN (Reuters) - Germany's decision to ban fireworks on New Year's Eve for the second year in a row to avoid crowds in the pandemic is "catastrophic" for manufacturers and means the loss of 3,000 jobs, the fireworks-makers association said on Thursday.

Outgoing Chancellor Angela Merkel and her successor Olaf Scholz agreed with leaders of Germany's 16 states to bar the unvaccinated from access to all but the most essential businesses such as grocery stores, pharmacies and bakeries.

The measures, which are meant to break a surge in daily coronavirus infections exacerbated by the discovery of the Omicron strain, also include steps to pass legislation in the national parliament to make vaccination mandatory.

The Association of the Pyrotechnic Industry (VPI) said it was shocked by the "catastrophic decision" by federal and state governments to ban fireworks and the sale of pyrotechnic products on New Year's Eve for a second year in a row.

VPI President Thomas Schreiber said the decision was driven by panic and not based on facts.

In contrast, the People for the Ethical Treatment of Animals (PETA) welcomed the ban as good news for pets, birds and other wildlife.

"The turn of the year is often a traumatic experience for animals," PETA official Jana Hoge said.

Every year on New Year's Eve, millions of animals suffered from the noise, flashes of lightning and the unfamiliar smells created by firecrackers, Hoge said.

To cushion the economic impact of the renewed restrictions, the government extended emergency liquidity aid for firms affected by the curbs in retailing and hospitality, the finance and economy ministries said in a joint statement.

The fourth coronavirus wave has hit Germany especially hard in light of its relatively low vaccination rate of below 70%.

Health authorities on Thursday reported more than 73,000 new infections and 388 deaths. Since January 2020, there have been nearly 6 millions infections and more than 102,100 deaths in the country with a population of more than 83 million people. 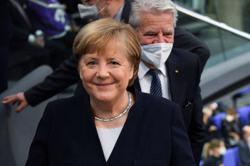