Pope to 'touch some wounds' on trip to divided Cyprus

By Philip Pullella and Michele Kambas 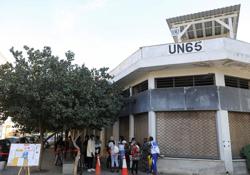 Pope Francis is greeted at the Larnaca International Airport as he arrives for his visit to Cyprus and Greece, in Larnaca, Cyprus, December 2, 2021. REUTERS/Guglielmo Mangiapane

NICOSIA, Cyprus (Reuters) - Pope Francis arrived on the divided island of Cyprus on Thursday, calling for people to "welcome and integrate one another" in a county that has found itself on one of the frontlines of Europe's migration crisis.

"It will be a beautiful trip but we will touch some wounds. I hope that we all will be able to gather up the messages given to us," Pope Francis told journalists on the ITA airlines plane from Rome.

The new airline has replaced Alitalia, the traditional carrier of popes for more than half a century, which went out of business earlier this year.

The Vatican embassy where the pope will be staying in the capital Nicosia is right on the dividing line that resulted from a Turkish invasion triggered by a Greek-inspired coup in 1974. A church in the compound that houses the embassy still bears scars from the crossfire.

The northern part of the island, including a section of its capital, is controlled by a Turkish Cypriot administration recognised only by Turkey as an independent state.

Francis, who shuns large, bulletproof cars, travelled in a small black Fiat 500 with open windows. He was greeted with cheers and applause as the vehicle navigated the capital's narrow streets.

Cyprus says it is struggling to cope with an influx of undocumented migrants, through the dividing line splitting the island or by boats from the neighbouring Middle East.

Francis, who has made defence of migrants and refugees a cornerstone of his papacy, has arranged to have 50 migrants relocated to Italy after his trip this week. He will also travel to Greece, including Lesbos Island, where many refugees have arrived.

"By your spirit of fraternity, you can remind everyone, and

Europe as a whole, that we need to work together to build a future worthy of humanity, to overcome divisions, to break down walls, to dream and work for unity," he said at the first stop of his trip, a visit to the Maronite cathedral.

"We need to welcome and integrate one another, and to walk together as brothers and sisters, all of us!"

He was later due to meet the president and address the diplomatic corps.

There are some 8,000 Maronites on the island who are members of the Catholic faith. Their descendants started settling on Cyprus from the 8th century onwards. 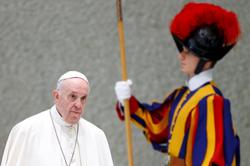