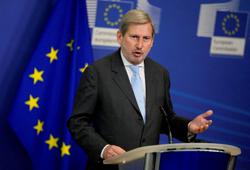 (corrects paragraph 6 to show government is to ask on Friday, not Wednesday)

VILNIUS (Reuters) -Lithuania's government said on Wednesday it would ask parliament to declare a state of emergency on its border with Poland from Dec. 10 as part of efforts to prevent the smuggling of migrants.

Poland currently provides the only checks-free route from Lithuania and Latvia to Germany, the destination for many migrants who have arrived in the region via Belarus in recent months.

Lithuanian prosecutors are pursuing 60 cases of illegal smuggling of people and new smuggler "networks" are being established, the Interior Ministry said.

"We see attempts by our own organised crime groups to work with Belarusian criminals to organise the smuggling," Bilotaite told reporters ahead of a government meeting. "We need to stop this secondary migration from gaining momentum."

The government is also to ask parliament on Friday to extend an existing state of emergency on Lithuania's border with Belarus and at camps hosting migrants who arrived from there.

The EU accuses Belarus of flying in thousands of people from the Middle East and pushing them to cross into the bloc via Poland, Lithuania, and Latvia. Belarus denies this.

Lithuania has built a razor wire fence along 100 km (60 miles) of its border with Belarus since the crisis started, though migrants have cut through it at least three times already, the Interior Ministry said.

In the past week, Lithuanian border guards have turned back around 50 people a day trying to enter illegally from Belarus, data showed.

"There are around 10,000 illegal migrants in Belarus. Until they are returned to their countries of origin by flights from Minsk, there is a sufficiently high risk that they could be directed towards Lithuania," the ministry said.