FILE PHOTO: A former guerrilla of the Revolutionary Armed Forces of Colombia (FARC) participates in a protest called "Pilgrimage for Life and Peace" demanding security guarantees and compliance with the peace agreements signed with the government, in Bogota, Colombia, November 1, 2020. REUTERS/Luisa Gonzalez/File Photo

WASHINGTON (Reuters) - The United States revoked its designation of the Colombian group the Revolutionary Armed Forces of Colombia as a foreign terrorist organization on Tuesday, Secretary of State Antony Blinken said in a statement.

FARC was formally dissolved after a 2016 Peace Accord with the Colombian government and no longer exists as a unified organization that engages in terrorism, Blinken said.

The two dissident groups that have formed out of FARC, La Segunda Marquetalia and FARC-EP, or People's Army, have been designated as foreign terrorist organizations, he added.

"The decision to revoke the designation does not change the posture with regards to any charges or potential charges in the United States against former leaders of the FARC, including for narcotrafficking," Blinken said in a statement.

Removing the terrorist designation will make it easier for the United States to support the implementation of the accord, he said.

The decision will allow U.S. government agencies like the Agency for International Development to work on peace implementation in parts of Colombia where demobilized FARC soldiers are located.

Founded in 1964, FARC was responsible for summary executions and kidnappings of thousands of people, including Americans.

"The designation of FARC-EP and Segunda Marquetalia is directed at those who refused to demobilize and those who are engaged in terrorist activity," Blinken said. 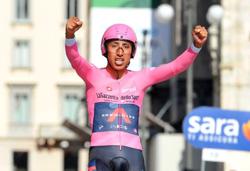