Two journalists released in Canada after arrest at indigenous protest

Supporters of the Wet'suwet'en First Nation hereditary chiefs, who are fighting the construction of TC Energy Corp's Coastal GasLink pipeline in British Columbia, carry banners as they march away after a protest on railway tracks in Toronto, Ontario, Canada November 21, 2021. REUTERS/Chris Helgren

(Reuters) - Two journalists whose arrests last week at an indigenous protest against a pipeline in Canada drew widespread condemnation were released on bail on Monday.

Amber Bracken, an award-winning photojournalist who has previously worked with the Guardian newspaper, and Michael Toledano, a documentary film-maker, were arrested on Friday by the Royal Canadian Mounted Police, which was enforcing a court-ordered injunction in British Columbia.

Over a dozen demonstrators were also arrested at the protest against TC Energy Corp's Coastal GasLink pipeline.

"The two journalists were released after signing conditions to abide by the injunction, to keep the peace and to attend court at a future date. Hearings continue for other contemnors," the police said in a statement on Monday https://bit.ly/3lmdbvV.

Police said on Monday their relationship with the media was "based on mutual respect and professionalism". The two journalists were not arrested for performing their job but for violating the injunction, they said.

Toledano said he was arrested at gunpoint. "My arrest and incarceration were punitive and a blatant attempt to repress images of police violence against Indigenous people in Canada," he said on Twitter late on Monday https://bit.ly/3kYBzTO.

The Canadian Association of Journalists had condemned the arrests and urged the immediate release of the two journalists. Both are required to return to court on Feb. 14 for a hearing related to allegations of civil contempt of court.

Hereditary chiefs from the Gidimt'en and the four other clans that make up the Wet'suwet'en people have been trying for more than a year to halt construction of the pipeline.

All of the 20 elected indigenous band councils along Coastal GasLink's 415 mile (670 km) route support the project. But Wet'suwet'en hereditary chiefs insist they have the final say.

(Reporting by Kanishka Singh in Bengaluru; editing by Richard Pullin) 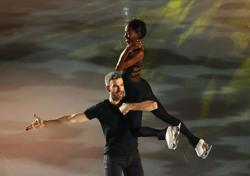