Part of residential building collapses in Georgian city of Batumi

It was not immediately clear whether there were any casualties or what caused the collapse.

Russia's RIA news agency reported that at least three people had been rescued, including a child. Several cars could be seen nearby, almost completely covered by debris.

Both TV stations showed footage of a building at least five storeys high with one section in the middle of it reduced to a pile of rubble and rescue workers going through the debris and using a ladder to evacuate nearby apartments. 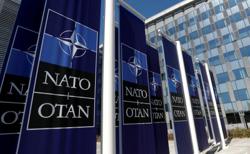