Chancellor or bust: Germany's Laschet fights for his political life 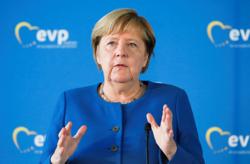 BERLIN (Reuters) - Conservative chancellor candidate Armin Laschet faced a scrap for his political future on Tuesday as lawmakers in his CDU/CSU alliance met to plot a way forward after suffering their first national election defeat since 2002.

The centre-left Social Democrats (SPD) narrowly beat https://graphics.reuters.com/GERMANY-ELECTION/RESULTS/klvykgldmvg/index.html the conservatives in Sunday's election, leaving Laschet, 60, to try to form a ruling coalition with the Greens and liberal Free Democrats (FDP) or else see his political career collapse.

He faces an uphill battle. The SPD, Germany's oldest party, won 25.7% of the vote in Sunday's election, ahead of 24.1% for the CDU/CSU - the conservative bloc's worst federal result.

Ahead of a crunch meeting of CDU/CSU lawmakers on Tuesday evening, conservative Economy Minister Peter Altmaier called for a "swift realignment in terms of personnel and content".

Laschet https://reut.rs/3Cvm6kC, whose fortunes began to slide in July when he was caught on camera laughing on a visit to a flood-stricken town, got the go ahead on Monday from his Christian Democrats (CDU) to explore a possible coalition with the Greens and the FDP.

But Markus Soeder, leader of the Christian Social Union (CSU), Bavarian sister party to the CDU, said there was only a small possibility the SPD would not manage to form a government.

"At the moment Olaf Scholz clearly has the best chances of being chancellor," Soeder said of the SPD's candidate to succeed Angela Merkel, who plans to step down after 16 years in power.

A survey by pollster Civey for the Augsburger Allgemeine newspaper showed that 71% of Germans think it is wrong for Laschet to lay claim to the chancellery.

One CDU lawmaker, speaking on condition of anonymity, said that if Laschet could not pull off a coalition with the Greens and FDP, he should go. The SPD hopes to talk https://reut.rs/3EVROJQ to the same two parties this week about forming a three-way government.

Laschet won the CDU party leadership in January and only secured the conservative chancellor candidacy in April after a public contest with Soeder.

Restricting Laschet's room for manoeuvre, another conservative lawmaker, Christoph Ploss, said the conservatives could not concede too much in any talks with other parties. "There can't be a coalition at any price," Ploss said.

Lawmakers from the CDU/CSU parliamentary group meet on Tuesday evening to discuss whether to reappoint Ralph Brinkhaus as their leader. Should other candidates run against him, a broader discussion about the alliance's direction could follow.

"Endgame for power in the CDU," ran a headline in mass-selling daily Bild's online edition.