(Reuters) - A U.N. expert has urged Indonesia to provide an independence activist in its Papua province with proper medical care to "keep him from dying in prison", after reports that his health had deteriorated.

Victor Yeimo, 39, who is the international spokesman of the West Papua National Committee, was arrested in the provincial capital of Jayapura in May.

He has been charged with treason and inciting violence and social unrest in relation to pro-independence protests that swept the remote, resource-rich region for several weeks in 2019. Yeimo has denied the charges.

His trial went ahead in August despite repeated requests from his lawyer for a delay on medical grounds, Mary Lawlor, U.N. special rapporteur on the situation of human rights defenders, said in a statement on Monday. https://www.ohchr.org/EN/NewsEvents/Pages/DisplayNews.aspx?NewsID=27494&LangID=E

"Indonesia must take urgent steps to ensure the fate does not await Mr Yeimo," she said, adding that his access to medical care had been restricted and his prison conditions "may have amounted to torture".

Asked for comment on Yeimo's treatment, a spokesman for Indonesia's foreign ministry said its permanent representative in Geneva was preparing a statement on the matter.

Papuan separatists have pushed for independence for decades, saying a 1969 vote overseen by the United Nations that brought the former Dutch colony under Indonesian control was illegitimate. Indonesia rejects that.

Yeimo is being treated at a Jayapura hospital after a court ordered he receive medical attention.

"If he has to go back to the correction institution then we know the condition is very poor and not good for his health,” she said. 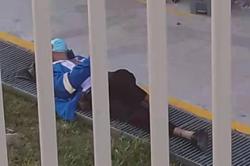