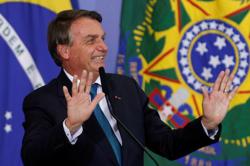 An undated image of two male members of the Piripkura tribe during an encounter with a FUNAI (Indigenous National Foundation) unit before they returned to live in the Amazon forest, Rondonia state, Brazil. Survival International/Bruno Jorge/Handout via REUTERS

BRASILIA (Reuters) - The only two known male members of the Piripkura tribe in Brazil live in isolation on ancestral lands the size of Luxembourg in the Amazon rainforest, resisting decades of invasion by loggers and cattle ranchers.

Brazil's indigenous affairs agency Funai renewed a protection order on Friday for the 242,500-hectare (599,230-acre) area in western Mato Grosso state. But the renewed protection will last just six months, unlike the three-year extensions granted for the territory since 2008.

The Piripkura's fate has become a test of indigenous rights under far-right President Jair Bolsonaro, who has criticized reservations for giving too much land to too few people and blocking the expansion of mining and farming.

Indigenous rights advocates had pressed for a three-year extension as in previous renewals. Advocate group Survival International called it a "stay of execution" by the government to gauge reactions before ending the protection altogether.

"We are still deeply concerned as the Piripkura's future still hangs very much in the balance, while the landgrabbers are circling round and poised to invade," said Fiona Watson, director of research and advocacy at Survival International.

Federal prosecutor Ricardo Pael, who has been seeking a court-ordered extension, said it should be renewed until a final decision on making the Piripkura an official tribal reservation is taken by Funai.

But he said the agency had selected a team of people to study the land demarcation that has no experience with uncontacted tribes, and some of its members had conflicts of interests due to links with the farming sector.

The Piripkura men, Baita and nephew Tamanduá, have only been seen in recent years in sporadic encounters with Funai staffers. Unshaven, long-haired and naked, they quickly disappear back into the forest, where other Piripkura are believed to live.

Baita's sister Rita Piripkura has been the men's contact with the outside world since she emerged to marry into another tribe on the nearby Karipuna reservation.

"I'm worried they'll be killed. There are lots of outsiders around there. They could kill them both and there won't be anyone left," Rita told Survival International in a recorded interview, recalling a massacre of her people years ago.

"White men arrived at dawn and killed everyone. They killed nine of us. My family escaped in a canoe," she said.

In July, federal prosecutor Pael got a court injunction for the eviction of farmers from the Piripkura land, the most deforested territory of any isolated or recently contacted Amazon people. Police have not yet acted on the order.

Anthropologists say the uncontacted tribes of the Amazon cannot survive without their land and are increasingly pitted against armed invaders interested in poaching, farming and mining in their territory.

The invaders have become bolder since the 2018 election of Bolsonaro, who once praised Colonel George Custer in a speech for his role in clearing the U.S. prairies of indigenous people.

He is backing a bill in Congress that would limit indigenous land claims and help to open tribal reservations for commercial mining and plantations.

Bolsonaro said on social media on Thursday that global food security would be endangered if top farm exporter Brazil did not limit native land claims.

Indigenous advocates worry that means an eventual extinction of protected territories in limbo, including the Piripkura land.

"It will be the end of the Piripkura," said Fabricio Amorim, a former Funai employee now with OPI, an NGO advocating for the rights of isolated and recently contacted indigenous people. 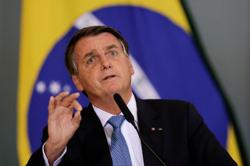