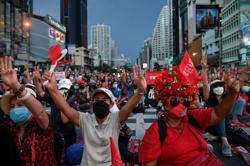 Prayuth has weathered two previous censure motions and is widely expected to survive a no confidence vote scheduled for Saturday, owing to his coalition's clear parliamentary majority of 270 seats verses the opposition's 212.

But the motion is unlikely to temper the anger of youth-led anti-government groups, which organised major rallies late last year that led to repeated standoffs and hundreds of arrests.

Protests have returned this year https://www.reuters.com/world/asia-pacific/thai-police-say-use-force-necessary-protesters-plan-new-rally-2021-08-11 with renewed support from Thais frustrated by lockdowns, record COVID-19 deaths and a troubled vaccine rollout, who have threatened nationwide demonstrations while the opposition grills Prayuth in parliament.

They accuse the former army chief and five of his cabinet ministers, including deputy prime minister and health minister Anutin Charnvirakul, of corruption, economic mismanagement and of bungling the government's coronavirus response.

"Every seven minutes a Thai person died because of the blundered management of the COVID-19 situation," opposition leader Sompong Amornwiwat of the Pheu Thai Party said in opening the debate.

"There are economic losses of 8 billion baht ($247.60 million) per day from a lack of management and lockdown measures that have failed."

Staunch royalist Prayuth took power in a 2014 military coup and remained prime minister after a 2019 election, making him the longest-serving Thai leader since the end of the Cold War.

The protests against him, which are outlawed under current coronavirus restrictions, have gathered steam in recent weeks, despite frequent, at times violent clashes with police who have responded with tear gas, rubber bullets and water cannon https://www.reuters.com/world/asia-pacific/thai-protest-leaders-detained-ahead-planned-car-mob-rally-2021-08-10. 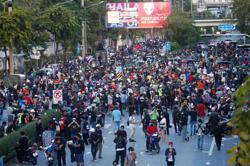