The Saudi-led coalition fighting the Houthi group in Yemen said earlier that it intercepted a Houthi drone that was targeting Abha International Airport.

Shrapnel was scattered in the vicinity of the airport, the coalition said.

Ekhbaria TV said a second armed drone was intercepted, but debris wounded eight people and damaged a civilian airplane inside the airport. It did not give further details.

The Houthis did not claim responsibility for the attack, but the Iran-aligned group regularly fires drones and missiles into Saudi Arabia.

The Saudi-led military coalition intervened in Yemen in 2015, backing forces of the ousted government of President Abd-Rabbu Mansour Hadi fighting the Houthis. 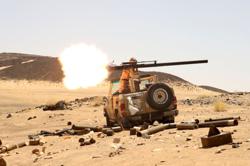