Lack of strong rival may hurt Canada's Trudeau in election 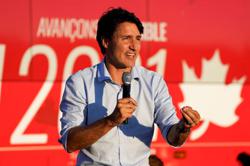 OTTAWA (Reuters) - Canadian Prime Minister Justin Trudeau faces an unusual challenge as he prepares to call an early election - without a strong opponent to rail against, the vote may fragment and leave him with another minority government.

Trudeau, 49, is expected to call a September vote any day now, taking advantage of a recovering economy and ramped-up vaccine roll out to try and regain the parliamentary majority he lost in 2019.

In the past two campaigns, Trudeau's left-leaning Liberals - seeking to retain support that might have gone to progressive parties - warned voters that a victory by the official opposition, the Conservative Party, would result in spending cuts and an inadequate climate change policy.

With polls showing the Liberals well ahead of the Conservatives this time, similar scare tactics could fall flat, which could mean that voters, sure the Liberals will win, will cast ballots for the New Democrats (NDP) or the Greens.

"Without a bogeyman it becomes harder for us," said one top Liberal with direct knowledge of the campaign strategy.

"If people are convinced we are going to win, then it makes it easier for them to vote for another party because they know Trudeau will still be prime minister."

Another senior Liberal who will play a direct role in the campaign lamented that potentially losing votes to progressive rivals "is the toughest part of having the status of front-runner".

Pollster Nik Nanos puts the Conservatives at between eight and 10 percentage points behind the Liberals.

Part of that is down to Conservative leader Erin O'Toole, 48, who has struggled to make himself known since taking over the right-leaning party last year during the COVID-19 pandemic.

If O'Toole is not seen as competitive "we may see a fragmentation of that progressive coalition where people feel they have political license to vote for the New Democrats", Nanos said.

The stakes are high for Trudeau, who has had to govern with a minority since 2019. Ending up with another government dependent on opposition parties would hobble his hopes for a free hand on climate change and social welfare policies.

The New Democrats in particular stand to gain from Conservatives' weakness because their leader, Jagmeet Singh, is well-liked.

Some 46% of Canadians have a favorable view of Singh, more than any other leader, with Trudeau at 37% and O'Toole at 28%, according to an Angus Reid Institute poll published on July 29.

Trudeau's Liberals need 15 seats to vault them into majority status, making the NDP's gains in British Columbia a concern.

"The Liberals should be worried," said Richard Johnston, professor emeritus in politics at the University of British Columbia.

Liberals say they face another tough challenge in the influential eastern province of Quebec, where they are running neck and neck with the separatist Bloc Quebecois.

"A big key driver in terms of strategic voting in Quebec will become 'Do we see a Conservative win on the horizon?'" said pollster Christian Bourque of Quebec-based Leger Marketing. "If Quebecers are convinced the Liberals will win, that's an open space for the Bloc."

In the 2019 campaign, Trudeau warned supporters against voting for other progressive parties by raising the spectre of what he said would be deep Conservative spending cuts.

The New Democrats predict he will try to use the same tactics this time round.

"I have every expectation Trudeau and the Liberals will do exactly that because they have done it in every single campaign I have ever seen," said Anne McGrath, the NDP's national director.

"It's quite possible that it will not have the same effect ... we should not have a fear-based voting system. People should vote for who they believe in."