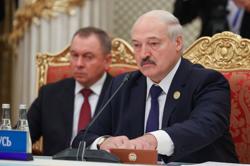 "I absolutely believe in a non-violent transition of power," Tsikhanouskaya, a 38-year-old former teacher and blogger, told Reuters. "What is going on in Belarus is our pain - we want this hell finished as soon as possible in our country."

"When we put enough pressure on the regime there will be no other way out," Tsikhanouskaya said in an interview. "I really believe Belarus can be a success story of a peaceful transition of power."

Tsikhanouskaya says she won an Aug. 9 presidential election but Lukashenko, who has ruled Belarus since 1994, said he won. She fled to Lithuania after a crackdown on protesters that followed the contested election.

Lukashenko, who in 2012 told Reuters he was "the last dictator in Europe", sought support from Russian President Vladimir Putin during the protests which he cast as an attempt by the West to stoke a revolution.

He has dismissed Tsikhanouskaya, who took part in the election after her husband Sergei was jailed and barred from standing, as a "housewife".

"Yes -- the Kremlin supports Lukashenko but about 25 countries are supporting us," Tsikhanouskaya said when asked if a peaceful transition was possible without a change in the Kremlin.

Tsikhanouskaya said she was deeply shocked by the death of a Belarusian activist found hanged in Ukraine, though she declined to speculate on who might be responsible for the death.

Vitaly Shishov, who was living in exile in Ukraine, was found hanged in a park near his home in Kyiv early on Tuesday, and Ukrainian police said they had launched a murder case.

"We want more support, more pressure, more assistance, more solidarity," she said, when asked if the West should impose more sanctions on Belarus. 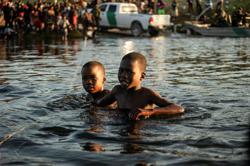 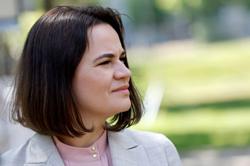