NIAMEY (Reuters) - Fifteen soldiers were killed as a result of an ambush in southwestern Niger on Saturday, the country's defence ministry said, blaming the attack on "armed terrorist groups."

The assailants ambushed a supply mission at 1100 local time in Torodi commune after which soldiers evacuating the wounded hit an improvised explosive, the ministry said late on Sunday.

"We regret that unfortunately 15 soldiers were killed, seven were wounded and six are missing," it said.

Like its neighbours Mali and Burkina Faso, Niger is a regular target for militant groups linked to al Qaeda and Islamic State, which have grown stronger despite the deployment of thousands of regional, Western and U.N. troops across West Africa's Sahel region.

Suspected Islamic State fighters killed at least 100 civilians on Jan. 2 in raids on two villages in western Tillabery region and at least 137 people in coordinated raids in March in neighbouring Tahoua region - among the deadliest attacks in recent memory. 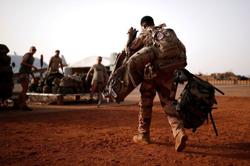