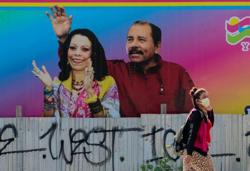 Oscar Sobalvarro, presidential candidate for the opposition party Alianza Ciudadanos por la Libertad (Citizens for Freedom) and his running mate for vice-president, Berenice Quezada, pose for a picture after registering as candidates for the November 7 general election at the Supreme Electoral Council (CSE) in Managua, Nicaragua August 2, 2021. REUTERS/Maynor Valenzuela NO RESALES. NO ARCHIVES

BRUSSELS (Reuters) -The European Union said on Monday it has imposed sanctions on eight Nicaraguans for human rights violations or undermining democracy or the rule of law, including Rosario Murillo, the vice president and wife of President Daniel Ortega.

The step adds to growing international isolation of Ortega's government, which has been criticized for crackdowns against his opponents and critical media in the Central American country he has dominated since returning to power 15 years ago.

Ortega's government has arrested several political adversaries, including presidential hopefuls, ahead of a November election in which Ortega, a former Marxist guerrilla and Cold War antagonist of Washington, will run for a fourth consecutive term.

Contenders from five parties on Monday registered with election authorities to enter the race, Nicaraguan media reported. By evening, no candidates had been put forward by the top opposition groups, whose leaders largely remain in detention.

The EU move follows sanctions by the United States on senior officials in Nicaragua and other members of Ortega's family.

The Council of the EU said the sanctions, which include an asset freeze and a travel ban that impedes the eight from entering or transiting through EU territories, brought to 14 the number of Nicaraguans restricted by the bloc.

"The political situation in Nicaragua has further deteriorated in recent months," the Council said in a statement.

"The political use of the judicial system, the exclusion of candidates from the elections and the arbitrary delisting of opposition parties are contrary to basic democratic principles and constitute a serious violation of the rights of the Nicaraguan people."

The Council of the EU said the detention in July of a seventh potential presidential candidate "illustrates the magnitude of the repression in Nicaragua and projects a grim picture for the upcoming elections."

Amnesty International on Monday called for rights violations in Nicaragua to be investigated, warning that Ortega had built a system of impunity likely to hamper fair elections.

"The road to the elections will be plagued by repressive actions implemented to make it impossible for the population to exercise their political rights without fear of reprisals," Amnesty International said in a statement. 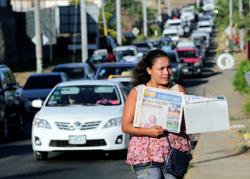 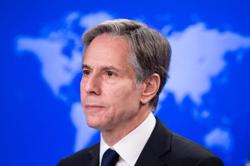